Vancouver, British Columbia, April 27, 2021 - Universal Copper Ltd. ("Universal Copper" or the "Company") (TSX Venture: UNV) (Frankfurt: 3TA2) is pleased to announce the Company has completed a comprehensive study of the historical exploration data at its district-sized, 39,000-hectare flagship Poplar Copper Project (the “Poplar”), located southwest of Houston, B.C. The Company believes the historic resource at Poplar can be significantly increased by both expansion of mineralization to the west and at depth and by defining new resources at a number of outlying exploration targets.

Following up on the April 21, 2021 news release on the northern priority targets in the north, the Company is introducing four priority target areas in the southwestern property area: Copper Pond, Lily, Spruce and Birch. 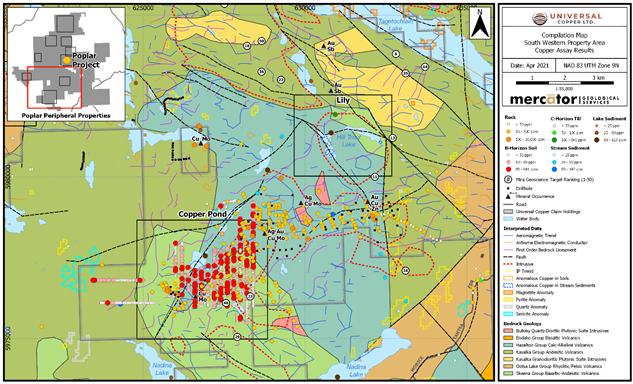 These western exploration targets appear to share the same similar characteristics as the northern targets:

Universal Copper CEO, Clive Massey commented, “This is a very exciting time for our Company with copper prices over four dollars per pound, the exploration season drawing nearer and the opportunity to drill test the newly identified additional targets on the Poplar claim block.  We look forward to executing a successful exploration program and potentially expanding the resources at Poplar.  With the adoption rates of Electric Vehicles and related technologies continuing to increase, not to mention the electrification of emerging economies worldwide, management sees this as an ideal time for one to leverage investments in the Copper sector”.

Following is a detailed description of each of the targets:

The Copper Pond target lies at the junction of an interpreted northwest and northeast trending fault. Arcuate magnetic and EM trends interpreted buried intrusions appear to parallel the faults. Copper Pond has been the site of significant historic exploration, including rock and soil geochemistry, with the junction area showing anomalous copper-in-soil, along with coincidental gold, and lesser silver, molybdenum, lead and zinc over a 1.5 by 2-kilometre area. Dome Exploration (Canada) Ltd.  completed a 14-hole diamond drilling program in the 1970 to 1973 period outlining an area 120 by 275 metres averaging 0.16% copper, which does not appear to have been followed up with further drilling. A Long Wave InfraRed (LWIR) pyrite anomaly lies immediately north of the drilled area. (Drill Data Source: British Columbia Ministry of Energy and Mines MINFILE Summary 093E071).

The Lily target lies along an interpreted north-northwest to west trending fault between two interpreted northwest trending faults (Riedel shear?) with a buried intrusive interpreted from the arcuate magnetic and EM trends. There are anomalous copper gold values from very limited geochemical sampling over the target area, and also anomalous molybdenum and gold values to the west and zinc values to the south of the target area, again from very limited sampling. The stream sediment and lake sediment sampling shows moderate to anomalous copper to the west and also within a lake over the target area.

The Spruce target lies at the southern end of a large, north trending buried intrusive defined by arcuate magnetics and EM trends, at the intersection of interpreted northeast and northwest trending faults. LWIR quartz and pyrite anomalies lie along the western margin of this interpreted data at the northern end of the target area. There is no historic geochemistry for this target. One moderately anomalous copper value was recorded from a lake sediment sample over the target area. 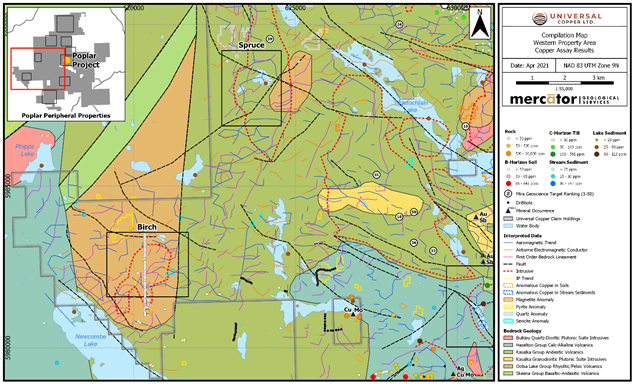 LWIR analysis, through proprietary processing of ASTER satellite data, has the ability to map or identify, through reflectance spectroscopy against a set of known standards, mineral distribution over extremely large areas covered by vegetation and shallow cover. The ground-penetrating nature of infrared radiation in the longwave bands allows viewing of mineral spectra in the first 30 to 60 cm of the earth’s surface through dense vegetation.

The geophysical data relied upon was the 2009 airborne magnetic and Electro Magnetic (EM) survey. The buried intrusives appear to exhibit a conductive rim with a more resistant core in EM response, and a magnetic high core with a low magnetic rim in the magnetic response. The interpreted intrusive trend was checked for conformity with the interpreted faults and then alteration responses either directly over or at the edge of the intrusives from the LWIR data, and finally, the bedrock geology.

The 39,280-hectare Poplar Project is road accessible, traversed by a 138-Kva power line, accessible via rail and only 88kms to Houston, B.C. or 400kms to the port at Prince Rupert B.C. The property is located in a historic mining area, only 35kms from the Huckleberry Mine and 42kms from Equity Silver. Historic diamond drilling on Poplar consisted of 39,648 meters in 147 holes and resulted in an estimated historic resource. An additional 135 diamond or percussion holes totaling 6,817 meters have been drilled over the remaining property.

The Poplar Deposit has several positive attributes as follows:

The technical content of this New Release has been reviewed and approved by R. Tim Henneberry, P.Geo, (BC) a member of the Company’s Advisory Board and a Qualified Person under National Instrument 43-101.

For additional information, please visit the Company's website at www.universalcopper.com

ON BEHALF OF THE BOARD OF DIRECTORS
“Clive Massey”
Clive H. Massey
President & CEO

Back To Archive
Disclaimer © Universal Copper Ltd. 2022 All Rights Reserved